Who would have thought the Balkans and the Indian Ocean have at least one thing in common? In those two regions, researchers are using technology and digital systems to help fight natural catastrophes induced by climate change.

The ever-changing environmental conditions have created the need for a more effective and timely prevention of natural disasters at a global scale. According to the European Forest Fire Information System, the average number of fires in August in the EU has increased dramatically from 464 in the period 2008-2018 to 1626 in 2019.

Drought impacts on society include anxiety or depression about economic losses, conflicts when there is not enough water, reduced income, fewer recreational activities, higher incidents of heat stroke and even loss of human lives. Droughts can also substantially increase the risk of wildfires.

The effects from the large and repeating fires in combination with wrong post-fire management practices are devastating for both natural environment and human communities. Therefore, a system for early detection of fires and droughts is necessary in order to protect both the environment and human life.

Joining forces in the Balkans

DISARM project is developed for this exact reason. DISARM is funded by the Interreg Balkan-Mediterranean cross-border cooperation programme. It aims at developing an integrated set of services to support prediction and promote prevention of drought and wildland fires. Bringing together partners from Greece, Bulgaria and Cyprus, the overall objective is to deliver an innovative, integrated observatory platform and an early warning system that will serve as a key tool for protecting the environment, thus promoting sustainable development in the region.

To achieve this, the partners have developed a rapid-response system to predict wildland fire behavior in the short term. This system is based on high resolution meteorological forecasts, forest-fire spread models, satellite data for the detection of fires and the estimation of biomass, surface observations and monthly forecasting systems. They have also developed an observatory for near real-time monitoring of wildland fire activity.

Moreover, DISARM includes a desktop and mobile application to increase public awareness with respect to drought and wildland fires. The application provides users with a tool to report forest fires, as well as the presence of dead biomass, which is of great importance for the ignition of a fire. The project uses modern technologies to involve civil protection services and the general public in the acquisition and sharing of information.

According to Vaso Kotroni, Director of Research at the National Observatory of Athens and Project Manager of the DISARM project, in the context of this project, countries have learned to work together, gained a common vision for the holistic response to forest fires and shared experience and knowledge. “The fact, for example, that when there are gusts of wind, the fire is transmitted much faster. This is something we are working on now. And as soon as it is done, it will be added to the services of DISARM “, Kotroni explains.

It is important to recognize that transnational cooperation creates many benefits. Through the transfer of knowledge, the exchange of ideas and experiences and teamwork, the results that occur from the implementation of a project have a much greater response. In July 2018, 102 people lost their lives in the fire in Eastern Attica, Greece. Many homes and businesses were destroyed. It was an unprecedented tragedy. DISARM project published a study on the meteorological conditions during the deadly wildfire and explored the capabilities of WRF-SFIRE system in reproducing the erratic fire spread. WRF-SFIRE correctly predicted the space-time distribution of the fire spread and demonstrated its utility in warning about the fire spread. Zisoula Dassiou, deputy Fire Chief of the Hellenic Fire Brigade, underlines: “In the past, it was not possible to send photos and videos to firefighters in the field. Now we can send them videos and photos and even this fire forecasting model so that they can take action.”

Meanwhile in the Indian Ocean…

Cassie and Davina are two loggerhead turtles that arrived at the same time on the coast of Reunion Island. Their adventures tell us a lot about the marine environment and allow us to learn about tropical cyclones.

After being released by the Kelonia Care Center, almost all the young loggerhead turtles reach the continental shelf of the Arabian Peninsula more than 5,000 km away. If the destination is the same, the route to get there varies a lot depending on the turtles. Some go along the eastern coasts of Madagascar and Africa, others prefer to stay offshore.

It is for this characteristic, the STORM-IO (Sea Turtles for Ocean Research and Monitoring in the Indian Ocean) project’s choice is to use bio logging method with the turtles. The movement of the turtles allows to collect data and study the migration and diving behavior of these species as well as to monitor the marine environment by logging data on, for instance, temperature evolution according to the depth.

The STORM-IO project was born in 2019 from the remarkable results of one former climate project about cyclones and climate change – ReNovRisk. In order to extend this study to the whole Indian Ocean, a huge collaboration starts between the research laboratory LACy from the University of Reunion Island, the Marine turtles’ observatory of Reunion Island (Kelonia), the Centre for the study and discovery of marine turtles and other teams from the Seychelles, Comoros, Madagascar, Mozambique as well as the French Southern and Antarctic Lands. 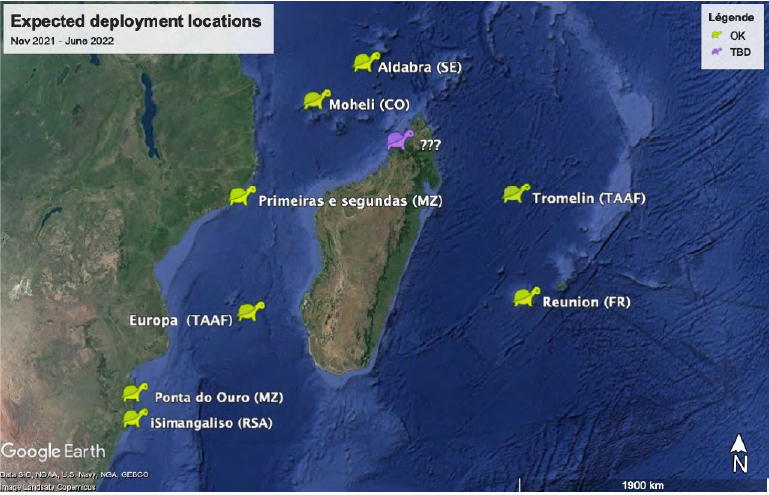 Olivier Bousquet, the project leader, Ph.D. in tropical meteorology has always been fascinated by extreme weather events such as tornadoes and tropical cyclones. According to him, science allows the protection of populations against natural risks. ”While most researchers feel that they are making a difference in the world, most research in the atmospheric sciences doesn’t have an immediate impact on the well-being and safety of people. When I was given the opportunity to join LACy to work on the development of tools to anticipate the impact of tropical cyclones on populations (and thus to truly contribute to saving human lives), I did not hesitate for a second”.

Olivier warns: “As global warming is expected to result in a significant increase in the intensity of cyclones in the southwest Indian Ocean, we all have an individual role to play in trying to limit our emissions”. Human responsibility is on the go!

Discovering climate variability while taking care of the marine animals

Deploying satellite-based Argos tags on animals is an approach that has been used for more than 20 years to study the movements of different kinds of species around the world. Cooperation between ecologists and oceanographers allows the improvement of the habitat models used for the implementation of more efficient preservation strategies, but also determines unprotected areas to be prioritized. Olivier emphasizes that ”the participation in this project of 10 marine reserves and the WWF attests to the undeniable interest of these measures in improving the preservation of these animals”.

Marine turtles are protected by numerous international conventions. Their handling is only carried out by duly accredited personnel. The tags are about 1% of the animal’s weight and automatically detach after 12 months, according to the limits imposed by international regulations.

The crucial phase of the project, which will consist in equipping almost simultaneously a hundred animals from Reunion, Seychelles, Mozambique, South Africa and the Eparses Islands should take place between January and March 2022. Olivier and his colleagues have planned alternatives to carry out these activities regardless of the evolution of the health crisis during this period and are therefore reasonably optimistic.

We have to keep in mind that the next step is to expand this operation to other marine animal species (whales, birds, sharks) and use this work to support and optimize marine spatial management strategies in the Indian Ocean.

As we have seen, cooperation projects like DISARM and STORM-IO provide an opportunity for a large number of partners to work together across many countries, providing knowledge transfer and learning through common experiences. By bringing people together and providing them with the right tools, we can mitigate big challenges like climate change, protect the environment and create a better world for the future generations.

This article is part of a series on how transnational cooperation contributes to the EU Green Deal. Click here to see all stories.

Renewable energy sources at your doorstep

By Vinicius Valente and Femke Boersma